The 12h Air Force was created using the 97th and 301st Bombardment Groups from the 8th Air Force Stationed in England. Following the conclusion of Operation Torch, the invasion of North Africa these groups went to N.Africa and were joined and reinforced by new crews and squadrons arriving from the States.

B-17 42-25233 joined the 301st Bombardment Group in Biskra, Algeria on 31 December 1942. The men arrived in the late morning. They were quickly treated to a visit by the Germans prompting everybody to hit the slit trenches. The first mission for Rigor Mortis and crew would be January 2 beginning a long history that would encompass over 120 mission takeoffs.

Rigor Mortis and his crews would fly 95 missions with the 301st BG while assigned to the 32nd Bomb Squadron during 1943. 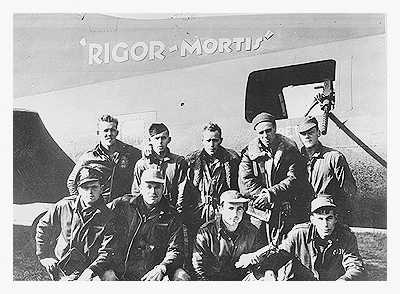 The above photo is of the original crew that ferried over to North Africa, via South America and Southern Africa and arrived in North Africa, December 31, 1942. The Rigor Mortis crew flew their first mission on January 2, 1943, 2 days after arriving into the combat zone. 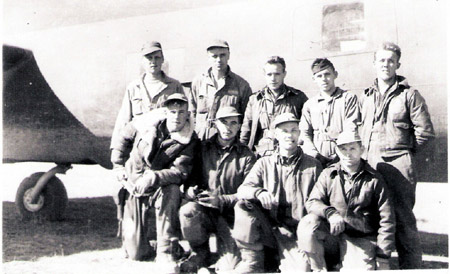 The following pilots are shown to have flown the Rigor Mortis on missions from January 2, 1943 to November 10, 1943.

Dates in ( ) Denote the months during which they are shown to have flown a mission in Rigor Mortis.

32nd Squadron did not keep full crew lists as did later Squadrons. I would like to hear from ALL crewmembers who flew with these pilots.

I would like to get in contact with any survivors, spouses, descendants or other family members. Thank You.

Bomb tag of S/Sgt. James Farrell and the first mission.

The book contains 100 bomb tags with diary-like entries by the men of 25233. These artifacts along with diaries, interviews along with squadron and group records comprise some of the research for this book. View great details of strike photos and newspaper clippings presented in this oversized 8x10 inch format.